Gold’s Relative Strength and What It Means – Umesh Shanmugam

Longtime readers of my reports, know that me a big fan of intermarket analysis as well as ardent believers in the real price of gold (real POG) or relative Gold. No this has nothing to do with the paper market versus the physical market. The real POG is essentially the POG relative to other assets and markets. There are two reasons why track this. First, Gold priced against the other currencies (specifically the Euro) has been a leading indicator for Gold in US$ terms. Second, Gold’s performance against commodities (in general) is a leading indicator. Over the week, I reviewed Gold’s performance in relative terms and it seems to have reasserted its uptrend.

In the chart below,have graph Gold against six other markets (foreign currencies, equities, oil, industrial metals, and bonds). Note that Gold is in a steady uptrend against each market with the exception of bonds. 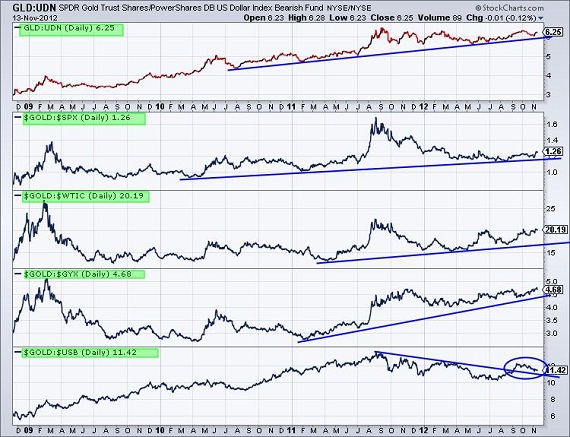 Gold priced in the inverse of the US$ basket is only 4% off its all time high while relative to oil and industrial metals, it just reached a one year high. Gold has turned down relative to bonds as they are close to testing their all-time high. Meanwhile, the yellow metal just matched a six-month high relative to the S&P 500.

So why should we care about all of this?

First, it tells us that Gold is in a healthy bullish position because its trending higher against all major markets with the exception of bonds. In other words, Gold is showing broad strength and is only being held back by the strength in bonds, which happens to be the largest market by a mile. Thus, when we see bonds soften, Gold should have a shot to retest its recent high.

To conclude, the real price of gold is trending bullish which implies good times ahead for precious metals in the coming months. The poor outlook for oil and industrial prices is a good thing for gold and silver producers,as their margins could expand even further in the quarters ahead. The correction that began at the end of September is likely within days of ending.